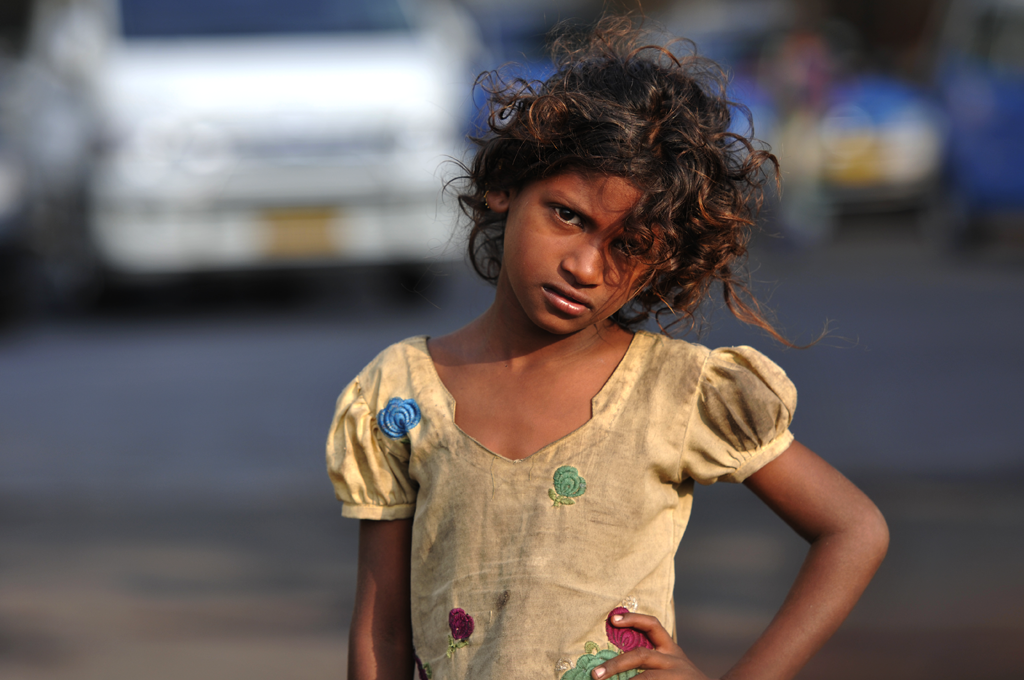 It is estimated that more than 400,000 street children in India exist. Mainly because of family conflict, they come to live on the streets and take on the full responsibilities of caring for themselves, including working to provide for and protecting themselves. This is a photograph of street child in the Apollo Bandar area of Bombay in India.

Wellington Pier formerly known as Apollo Bunder was photographed by Kristian Bertel, the place was an important pier for embarkation and disembarkation of passengers and goods in the city of Bombay now Mumbai, India in the late 19th century. It is the location of the famed Gateway of India and the only passengers using it now are those who are taking the ferry to Elephanta Island. 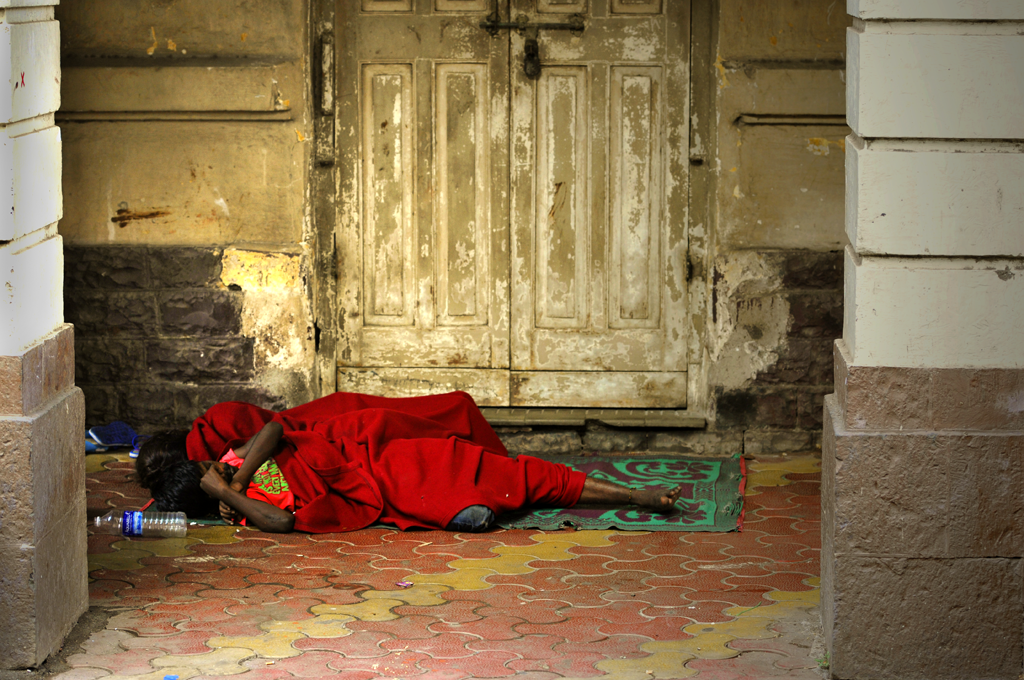 An increasing number of migrants looking for employment and better living standards are quickly joining India's homeless population. Although non-governmental organisations are helping to relieve the homelessness crisis in India, these organisation are not enough to solve the entire problem. In this photo people are sleeping on the pavement in the southern part of Bombay.

Derived from the Palla fish
The original name for the pier Bunder actually means port or more correctly, haven was derived from the Palla fish that were sold at this spot in old times. This was corrupted to the Portuguese Pollem and finally to the English Apollo. This old name was popular among Indians and is still used today instead of Wellington Pier. The pier was once a maze of wharves and docks where brisk trading took place. During the months of April and May the pier was particularly busy, with thousands of baskets of cotton being stacked ready for loading on to ships. There was frantic activity on the Cotton Green, at the Customs' House and at the hydraulic presses where the raw staple was baled for export. Since incoming passengers had to disembark together with their luggage at the Customs' House which was further north near the Mazgaon dock, passenger ships would make only a short stop at these piers in order to land the mail. 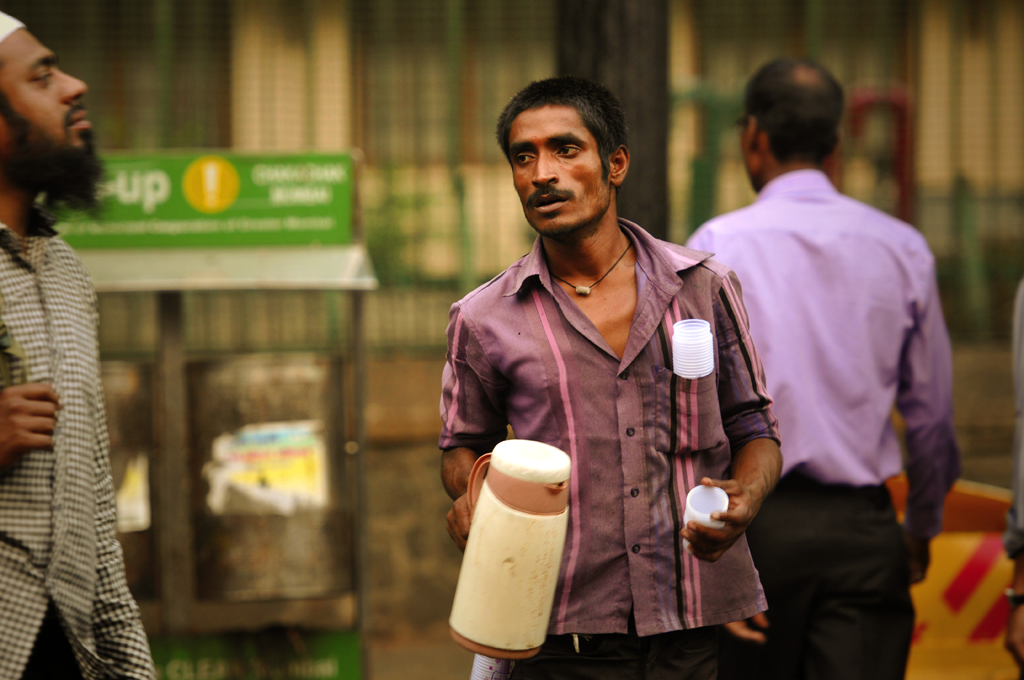 Masala chai is a flavored tea beverage made by brewing black tea with a mixture of aromatic Indian spices, and herbs. Originating in India, the beverage has gained worldwide popularity, becoming a feature in many coffee and tea houses. Bombay photo of an Indian man selling chai tea in India.

Chai tea in the streets of Bombay
The simplest traditional method of preparing masala chai is through decoction, by actively simmering or boiling a mixture of milk and water with loose leaf tea, sweeteners, and whole spices. Indian markets all over the world sell various brands of 'chai masala'. In Bombay, many chai tea vendors like in the photo above, are selling chai tea in the streets. A common Maharashtrian practice for preparation of one cup of chai is to first combine one half cup of water with one half cup of milk over heat. Sugar may be added at this point or after. Ginger is then grated into the mixture followed by adding a 'tea masala'. 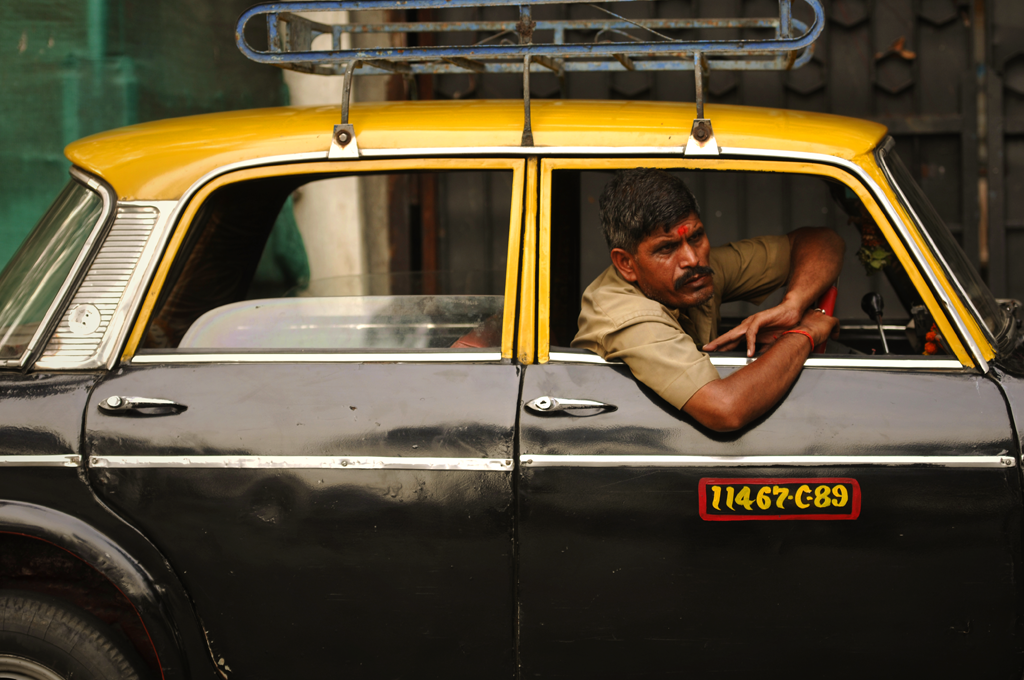 Taxis in Bombay, India
In India most taxicabs, especially those in Delhi and Bombay, have distinctive black and yellow liveries with the bottom half painted black and upper half painted yellow. Taxicabs arrived in India when they began to complement horse wagons back in the beginning of the twentieth century and there is now around 55,000 taxicabs in Bombay alone. The black and yellow taxis in Bombay, are integral part of the city's heritage and have been depicted in numerous Bollywood movies. These metered taxis ply throughout Bombay and have monopoly from Bandra to Churchgate on the Western line and Sion to Chatrapati Shivaji Terminus on the Central line. 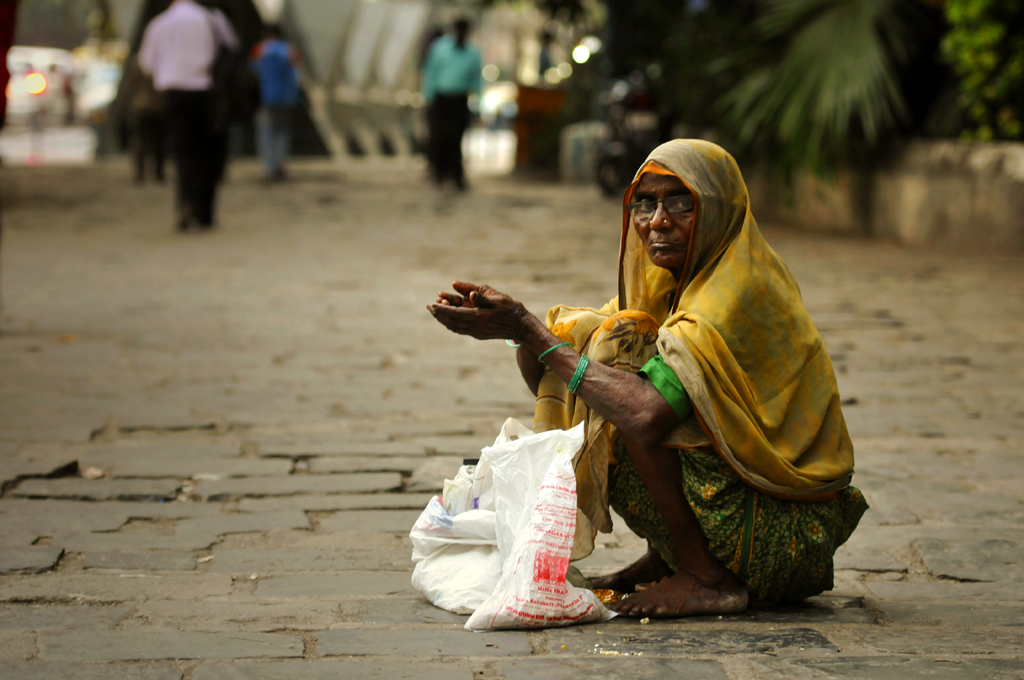 For a foreign tourist who is not used to seeing so much widespread poverty, it can be confronting and difficult to resist giving money. However, the reality is that it is likely you are not actually helping. Bombay portraiture of a woman sitting on the ground begging.

Gateway of India and Elephanta caves
Beginning in 1900, the British administration started to reclaim the area in order build the Gateway of India, designed to welcome King George V. The entire area now serves as a magnet for tourists visiting the gateway and nearby Taj building, going to the Elephanta Caves. From the Gateway of India people can visit the Elephanta Caves, which is an exciting trip from Gateway of India by ferry and a highlight of a trip to India and Bombay. Once on the island, one can walk or take a toy train ride to reach the starting point. Nearly 100 steps take you near the caves. The first cave is the best preserved and the only one worth spending time and a great attraction for half day trip to visit this historic landmark. The caves are amazing with sculptures carved out of the walls dating back at least 2,000 years. 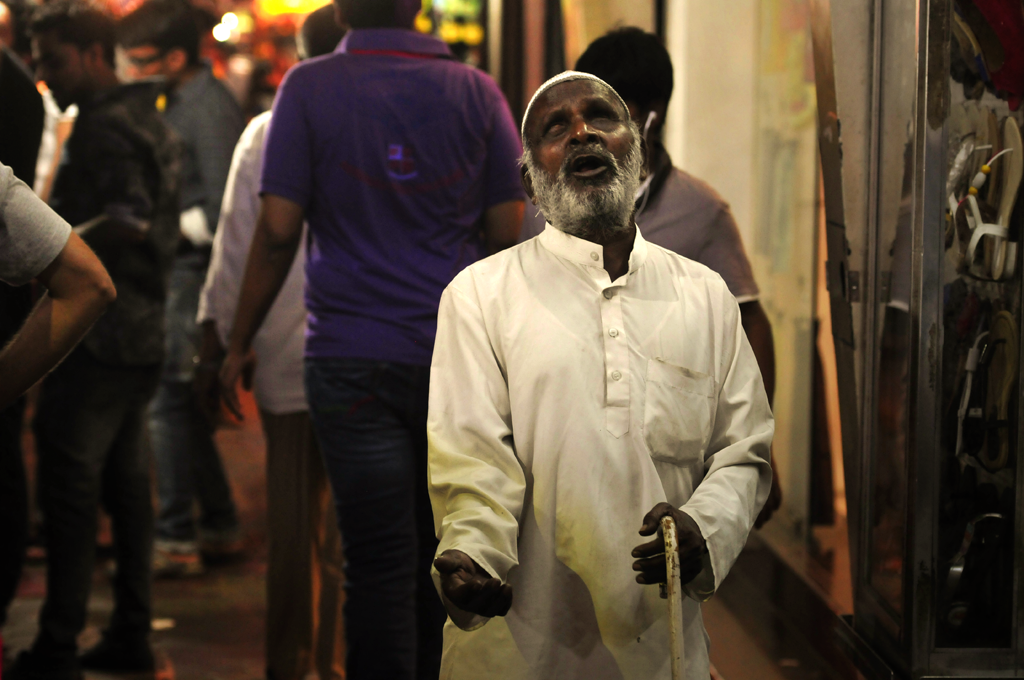 A blind man is begging in the Apollo Bandar area of Bombay in India. Begging is most prevalent anywhere that there are tourists as in tjis photograph taken at the Shadid Bhagat Singh Marg in Bombay. This includes important monuments, railway stations, religious and spiritual sites, and shopping districts. In big cities, beggars will often be found at major traffic intersections as well, where they approach vehicles while the lights are red.

Photographs from different neighborhoods in Bombay, India
The Apollo Bandar series of photographs are part of the photographer Kristian Bertel's travel pictures taken on his India travel journeys. Photos that capture the adventure through the lens into Bombay, India. The travel pictures are often hightlighting portraits of people and cityscapes of sceneries that the photographer was seing. Pictures that give the advantage of showing the city through different neighborhoods. What unfolds is a city of amazing diversity. There are few pictures without people, because Bombay is people. Kristian Bertel is working as a travel photographer and he is available for editorial and travel assignments all over Europe, Asia, Africa and in the Middle East. For further information and inquiries please:
Contact the photographer